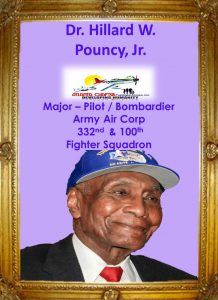 Hillard is a world traveler, having traveled to over 40 different countries and four continents, plus islands in Central America. He also lived in Saudi Arabia for a time.

Hillard was born on February 8, 1922 in Prichard, AL. He earned a PhD in Organic Chemistry from Syracuse University in 1958.

While attending Tuskegee Institute Hillard met another student, Mattie Mae Hunter, and they were married in 1947. Hillard and Mattie were married for 60 years until her death in 2007. They have one son and one grandson.

He is retired from Union Carbide where he worked as a chemist for 30 years. After he retired, he lived and worked in the Kingdom of Saudi Arabia for six years while he was a technical advisor to Saudi Arabian Petrochemical Company.

In 2008, Hillard received the Congressional Gold Medal in recognition of service with the Tuskegee Airmen during World War ll. Hillard also served with the New York air National Guard and retired as a Major in the U.S. Air Force Reserve.

“My story is a simple one. In everything I did–whether for my country, my family, my people, or my Maker—I did my best. I am convinced this is the meaning of being a Tuskegee Airman.”