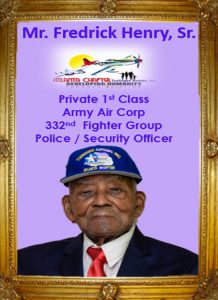 Frederick Henry, Sr., (PFC) World War II Veteran and one of the Documented Original Tuskegee Airmen paved the way for the integration of the U.S. military. DOTA Fred Henry served in the Army Air Corps. He was a member of the 99th Fighter and 332nd Bomber Squadrons.

The Tuskegee Airmen were the first African-American military aviators in the United States Armed Forces. During World War II, black Americans in many U.S. states were still subject to the Jim Crow laws [N 1] and the American military was racially segregated, as was much of the federal government. The Tuskegee Airmen were subjected to discrimination, both within and outside the army. Per Mr. Henry, “some of the white soldiers did not want to integrate. The military had to enforce court-martial if the white soldiers did not want to take orders from black military officers.”

Mr. Henry went into the military at a time when it was stated that blacks could not fly or work on airplanes; nor hold certain positions in the military. Mr. Henry went in the Army Air Corps for pilot training but became a security policeman and patrolled the base, town, financial areas and protected the population. He stated; “We did our best to prove them wrong.”

After coming back from the war; the town of Tuskegee was segregated just like Detroit, Michigan. “No black military security policemen could carry weapons on their person while in uniform while on the post in Tuskegee, but were allowed to have them secured in their jeep vehicles.” Mr. Henry in an interview with the American Black Journal (Public Broadcasting System) stated that the military and “war did not change segregation; only the civil rights action brought about change.”

Mr. Henry was also a member of the 332nd Fighter Group which began flying heavy bomber escort missions and, in July 1944, with the addition of the 99th Fighter Squadron, it had four fighter squadrons.